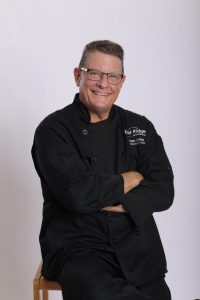 Executive Chef Hodes has extensive experience in health care, hospitality and cruise ship dining services.  Previously, he was Executive Chef and Manager of Dining Services Operations at Baptist Hospital of Miami, a position he held for 27 years. Chef Hodes has worked as an executive sous chef with Marriott Hotels at the Orlando World Center, Biscayne Bay Marriott and the Casa Magna Resort in Cancun, Mexico.  He has been the Sous Chef at Royal Caribbean Cruise Lines, Norwegian Cruise Lines, Marriott Inflight division and Chef of Kings Bay Country Club.

Educated in Mallorca Spain, he received a Bachelor’s Degree in Culinary Arts and Hotel Management from Bournemouth College of Technology in England.

During his extensive career, he has received accolades for innovation.  In 2008 Chef Hodes was named the winner of the Premier Healthcare Alliance’s Illuminating Excellence Award for his exceptional leadership in the healthcare foodservice field.  In 2009 he was recognized by Health Leaders Magazine as one of the top 20 most innovative Food Service Executives in America.

For Premier Healthcare Alliance which operates one of the leading healthcare purchasing networks and the nation’s most comprehensive repository of hospital clinical and financial information, he is a founding member of the organization’s Culinary Committee.  He currently works with leading chefs in designing health food programs for hospitals, schools, assisted living communities along with colleges and universities.

Chef Hodes is eager to share with East Ridge residents his passion for cooking and introduce new items on their menu.  East Ridge’s dining venues are open daily and serve three meals a day.  He plans to incorporate farm-to-table produce that can be locally sourced from neighboring farms in the Homestead area.