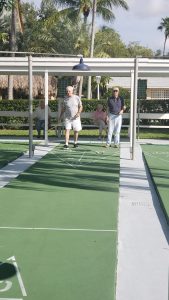 East Ridge at Cutler Bay served as the host location for many of the competitions of the 6th annual Cutler Bay Senior Games.

Avid shuffleboard players gathered at the life plan community for the Shuffleboard Mixed Singles and Shuffleboard Doubles and Mixed Doubles.

“Cutler Bay loves with partnering with East Ridge,” said Gabbie Blaylock, Events and Program Specialist for the city’s Park & Recreation Department. “They offer amazing facilities and we’re glad to be able to showcase them to Cutler Bay residents.”

Several East Ridge residents participated in the Games including Sandra Reed who dominated her match.

“It’s great that East Ridge hosts the games,” she said. “This is my fourth Senior Games and it always turns out to be more fun than competition.”

Each of the games played at East Ridge requires skill and practice. Shuffleboard, for example, requires the strategy of chess and finesse of billiards. Winning at shuffleboard rewards seasoned cunning over callow impatience according to competitive players.

Jose Rodriquez, a member of the city’s Communities for a Lifetime Committee (CFAL), joined East Ridge residents in the competition. He praised the camaraderie of the Games and pointed out the life plan community’s commitment to positive aging mirrored the mission of CFAL.

“We fully endorse programs such as the Senior Games,” he said. “We’re looking forward to exploring other ways we can collaborate with East Ridge because it would be great for all Cutler Bay residents, not just older adults.”