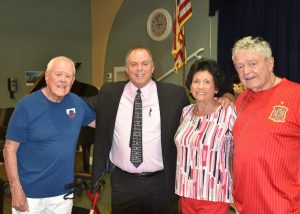 He entertained guests and residents by sharing his life-changing story of completing the feat in less than 14 months. This accomplishment means he successfully swam 28 miles circumnavigating Manhattan Island, swimming 24 miles between Catalina Island and the California mainland and the 22 ½ miles across the English Channel from England to France.

Scott’s dad, George, and stepmom, Marcia—residents at East Ridge— proudly sat in the front row and were thrilled hearing his account and the special details required to accomplish his achievement.

In 2018, only 204 people have successfully completed this challenge and Scott was the first to do it in 12 months.

His dream began as a teen in 1972 when he read a book about great American athletes who had a chapter about Florence Chadwick, a champion swimmer from San Diego, who set records. Her accomplishments intrigued him.

Loving swimming may have been ignited when he was only nine months old when he learned to swim in North Miami Beach.  An instructor, Cy Foreman, dropped him in the water, a technique that was used to teach babies to swim.

He became a backstroke champion as a competitive swimmer in high school and in college and worked as an ocean lifeguard. Medical school redirected his interests.

In 2002, he learned of a product known as an “Endless Pool” offered the ability to swim distances without needing an Olympic size pool or ocean.  After testing it, he began swimming 30 miles a week in the modular pool.

“There’s a goal in each of us,” Scott told his audience. “No matter what your age, you just need to learn what you are good at and go for it.”

Speaking to groups is one of the ways he believes he pays it forward as well as helping others who either want to start swimming or have greater aspirations.

“You don’t get a medal for accomplishing the Triple Crown. You do it for the journey. Now I can help others achieve their goals as well,” he added.

Dad, George, wanted to share with the audience a story that summarized Scott’s drive. He told the story about how Scott would ask why he had to mow the lawn each week.

“I’d tell him it builds character,” he said. “Having him speak at East Ridge made us proud. Now I know I gave him good advice back then. It worked!”